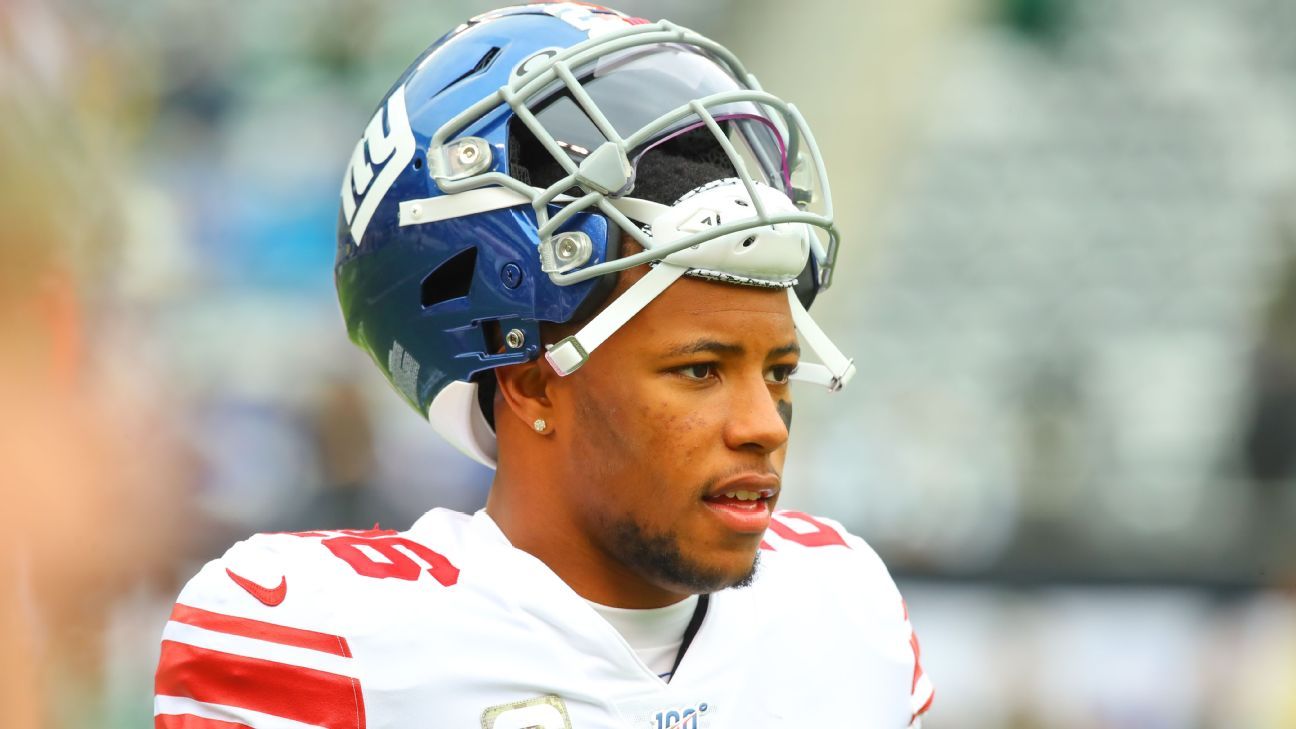 EAST RUTHERFORD, N.J. – Running back Saquon Barkley isn’t 100 percent. He’s still not going to accept being shut down with the New York Giants at 2-8 and the need to eventually focus on the future.

Barkley had an X-ray on his shoulder after Sunday’s 34-27 loss to the New York Jets, a source told ESPN. The shoulder is expected to be fine.

He’s also still trying to get back to 100 percent from the high ankle sprain that forced him to miss three games last month. Barkley is averaged just 2.6 yards per carry in the four games since coming back, after averaging 6.4 yards over the first three weeks of the season when he was healthy.

At least there is time for him to recover with the Giants on their bye week. Players will be off from Thursday until Monday. Barkley won’t even consider shutting it down when they return.

“The mindset of sitting me out and resting me for the rest of the season is beyond me,” Barkley said. “I do not agree with it. It won’t happen. I’m going to keep going until I can’t go no more. That’s the player I am and I’m going to do it for my teammates.”

Barkley is coming off a career-low one yard on 13 carries against the Jets. He also struggled in pass protection, allowing a pair of sack/fumbles to safety Jamal Adams, one of which was returned for a touchdown.

The Pro Bowl running back is not about to blame it on his health.

“What’s not being myself? Yes, I do feel like myself,” Barkley said. “I would love to go for 100 yards every game. I would love to be doing the things I was doing last year. Trust me. I don’t like the fact I was able to have one yard against a great team — respect to them – but I feel if you see me get into open space I was still making people miss.

Sitting Barkley over the final six games of the season in order to limit the toll on his body and ensure he’s healthy for the future isn’t something the Giants are considering. It would strong conflict with the organization’s desire to do everything in its power to win games now.

“Absolutely not,” coach Pat Shurmur said of the idea on Monday.

Barkley also seemed to dispute the idea that a running back only has so many carries in his body. Or at least that it varies greatly depending on the person. He mentioned the workloads that players such as Walter Payton, Emmitt Smith, Barry Sanders, Thomas Jones, Curtis Martin had during their careers. It was much greater — and with more runs and less action as a receiver — than anything that Barkley is likely to endure.

Barkley did note that it’s easy to see that defenses are keying on the Giants’ top weapon. That’s just something he’s going to have to deal with long term. He dealt with it last year as well, on his way to earning NFL Offensive Rookie of the Year honors after compiling 2,028 total yards.

“The opportunities, I just have to take advantage of the opportunities I get,” Barkley said. “But to say I’m not healthy and this and that, those are just excuses. Everybody is banged up. Everyone is going through something. I’m not going to let that be an excuse for why I’m not having a successful season. The reason why I’m not having a successful season is because I’m not making enough plays for my team. And that’s just it.”