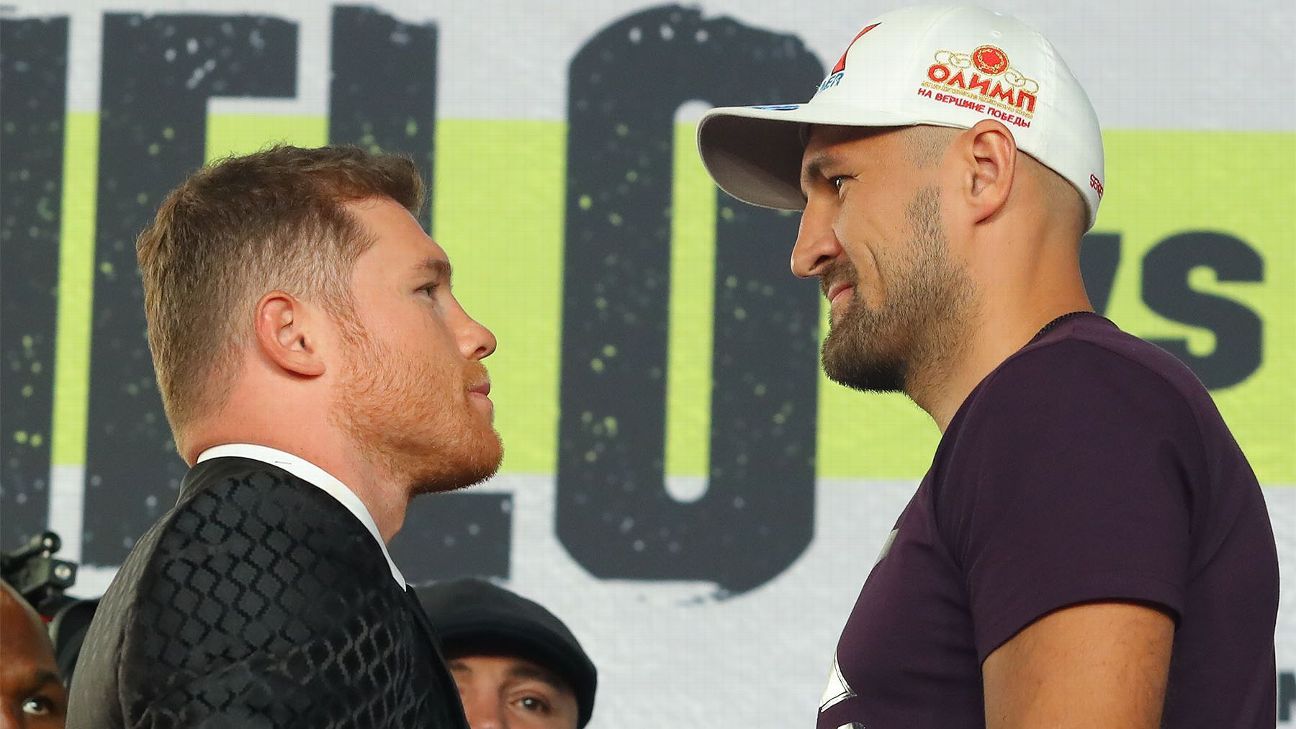 When middleweight world champion Canelo Alvarez and light heavyweight titlist Sergey Kovalev moved close to each other and stood face-to-face for the requisite staredown on Wednesday evening, the size difference between the two was stark.

The 6-foot Kovalev, who packs tremendous power, is quite obviously a much larger man than the 5-foot-8 Alvarez. But Alvarez has spent much of his career daring to be great and taking on all challenges.

The way Alvarez sees it, moving up two weight divisions to challenge the “Krusher” for his 175-pound world title is just another opportunity to make a massive fight and add to his legacy when they meet in a much-anticipated showdown on Nov. 2 (DAZN) at the MGM Grand Garden Arena in Las Vegas.

“I’m very motivated here,” Alvarez said through an interpreter at a news conference at Union Station in Los Angeles to kick off the promotion of one of the year’s biggest fights, which will be the third bout of Alvarez’s 11-fight, five-year, $365 million deal with DAZN. “It’s an honor for me to share the ring with a fighter like Kovalev, who I met in 2012 [when they both trained in Big Bear Lake, California].

“Now we’re about to make history. I know it’s going to be the most difficult fight of my profession. I will give the best I have in the ring and that day we can yell, ‘Viva Mexico.'”

If Alvarez wins, he would become only the fourth boxer to win a junior middleweight world title and one at light heavyweight. The other three are in the International Boxing Hall of Fame: Sugar Ray Leonard, who works for DAZN and was on hand, Thomas Hearns and Mike McCallum.

“When talking with Canelo about his career goals, he said he wanted to make history, and fight the very best,” Golden Boy CEO Oscar De La Hoya said. “This is why we had to be very strategic and thoughtful in planning out his next fight, and while it may have taken a bit longer than we wanted, we know that it was worth the wait. Canelo has been preparing for this moment and we know that on Nov. 2 he’ll write a new chapter in boxing history.”

Alvarez, boxing’s biggest star, is also seeking to become the fourth Mexican fighter to win world titles in four divisions. He has won titles at junior middleweight, middleweight and a secondary title at super middleweight in December, after which he returned to middleweight. The others are Hall of Famer Erik Morales, Juan Manuel Marquez and Jorge Arce.

As the star of the show, Alvarez could have demanded Kovalev agree to a catch weight, in which Kovalev would have to weigh in at an agreed-upon weight below 175 pounds. It would give Alvarez an advantage by making Kovalev deplete himself even more than he already does to make 175. But Alvarez, in a surprise to many, did not demand a catch weight.

“It’s a challenge and 100 percent I want to show people that I am capable and I want to make history in boxing by taking this challenge on,” Alvarez said.

“Canelo, I’ve always admired you. Your trainers did a great job with you. I gotta admit that,” McGirt said. “I really take my hat off to you for having the balls for taking a step up and not having a catch weight but do what real champions do and step up to the challenge.”

Because of the massive amount of money Alvarez brings to the table, he is the rainmaker in boxing and could have picked any fighter he wanted to face between junior middleweight and light heavyweight. But he picked Kovalev because he has a big name, a world title and an action style.

“We know Kovalev well and we know the challenge that we are facing,” Reynoso said through an interpreter. “He’s a great fighter that leaves everything in the ring and in one punch, he could end the fight. And we know it’s going to be a great challenge. We want Saul to be a champion in four weight classes.”

Kathy Duva, CEO of Main Events, which promotes Kovalev, said she was not surprised that Alvarez would take such a big risk by fighting Alvarez.

“Canelo, I never met you before today but I have nothing but respect for you,” Duva said. “When reporters ask me to speculate about why would you want to move up two weight divisions and take on a fellow future Hall of Famer like Sergey Kovalev, I tell them that I understand completely, because a long time ago ‘Sweet Pea’ [the late Pernell Whitaker] taught me how great fighters think.

“Canelo, you may have bit off more than you can chew, but that’s OK. Great fighters, the ones who care more about their legacies than wins and losses, are not afraid to challenge themselves. And win or lose, history will reward you for taking a risk.”

The sides began talking about the fight during the summer but they could not make a deal, in part because Kovalev had a mandatory defense scheduled against England’s Anthony Yarde. Kovalev and Duva could have bought their way out of the fight, but with the fight date of Aug. 24 so close, and the buyout deal getting complicated, the Los Angeles-based Kovalev (34-3-1, 29 KOs), 36, went through with the bout in his hometown of Chelyabinsk, Russia, and knocked Yarde out in the 11th round. Three weeks later, Canelo-Kovalev was finalized.

“Thanks to Canelo and his team for making this opportunity to get this fight,” Kovalev said. “I really think this is a very big test for me in my boxing career because he is one of the best fighters in the world right now and I’m happy and excited, really.”

Kovalev, who will be making the second defense of his third title reign, said when he heard from manager Egis Klimas that Alvarez wanted to fight him, he did not believe him at first.

“I never thought about or imagined that someday I would share a ring with him,” Kovalev said.

Then Kovalev recounted the conversation he had with Klimas when he told him Canelo wanted the fight.

“Are you kidding me,” Kovalev said in reaction to the news.

“He said your division,” Klimas said.