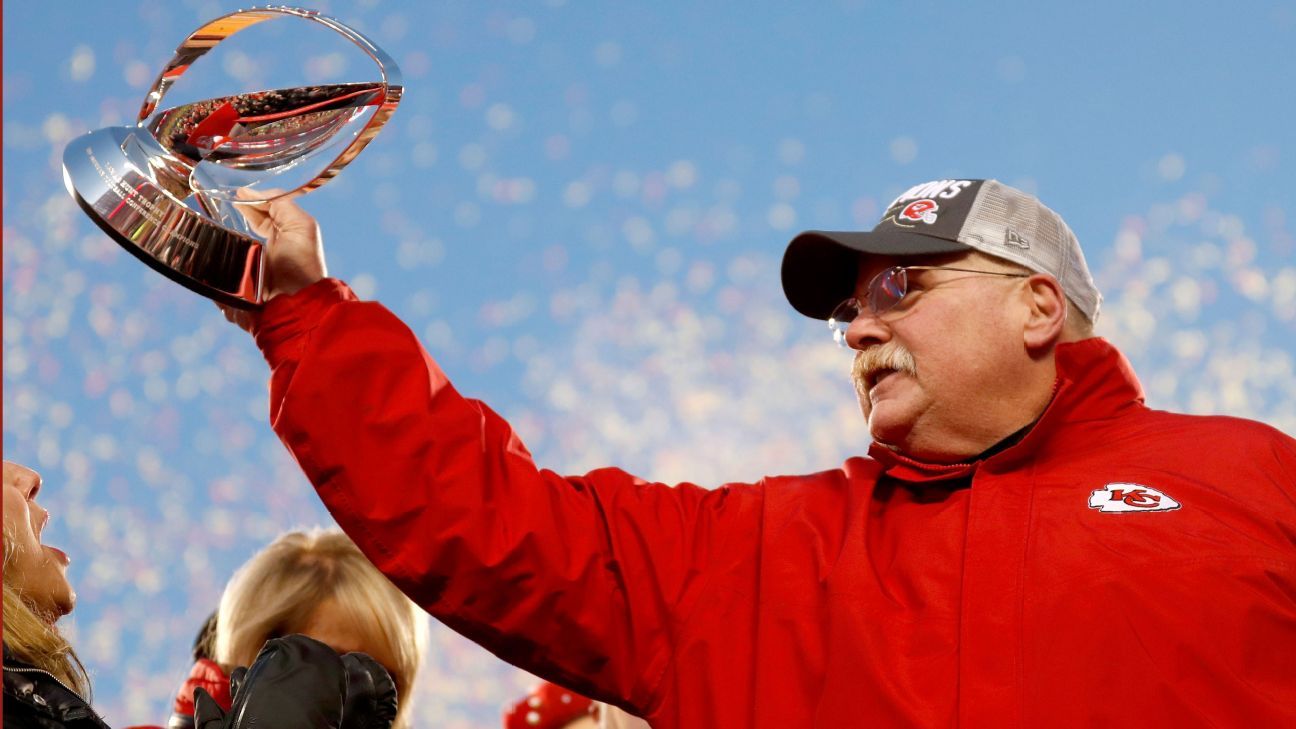 Andy Reid and Kyle Shanahan can share a few cross-generational notes before they take their talents — and their talented rosters — to South Beach. Neither the 61-year-old Reid nor the 40-year-old Shanahan has won a Super Bowl ring, but both are living, breathing advertisements for how to lose one, and for how to handle the fallout with dignity and grace.

That fallout is considerable, of course, as the coaches of the Kansas City Chiefs and San Francisco 49ers will be constantly reminded between now and February 2nd in Miami Gardens, Florida, site of Super Bowl LIV. Back in the big game for the second time in his head-coaching career, and for the first time in 15 years, Reid did not have his Philadelphia Eagles ready to play four quarters in his one-and-done Super Bowl appearance against the New England Patriots. Philly’s bizarre bleed-the-clock strategy in the final minutes — while trailing by two scores — bewildered Bill Belichick, his players and the Fox broadcast team.

Shanahan? He was Atlanta’s offensive coordinator and the primary culprit during the mother of all Super Bowl meltdowns three years ago, gifting Belichick another ring in ways even Reid couldn’t fathom. His playcalling in the fourth quarter even angered his loyal quarterback, Matt Ryan, as the remains of a 28-3 lead were squandered in what would be a devastating overtime defeat.

“I remember every single play,” Shanahan would say after taking the 49ers job, “and I will go over those for the rest of my life. … Everyone tries to compliment you, make you feel better, and it doesn’t work.”

No, it does not. Shanahan has been accountable and honest when assessing his starring role in that Hollywood-sized disaster. His next opponent, Reid, has been those same things when fielding questions about his inability to get to the big one, never mind his inability to win the big one. Only six men in pro football history have won more games than Reid, and those six combined for 29 championships. Reid has never acted bitter about his place on the outside looking in.

But his countless admirers around the league — all of them desperately wanting good ol’ Andy to disprove Leo Durocher’s theory that nice guys finish last, or at least not first — understand that Reid needs a ring to secure a lasting place among the true NFL greats. They understand that Reid didn’t bathe himself in glory in his first Super Bowl, when his Eagles walked back to their huddle and showed preseason urgency while trailing New England by 10, compelling Belichick to ask his assistants if the scoreboard was indeed correct.

“How many Philadelphia fans are screaming at the TV, saying, ‘Hurry up?'” Joe Buck asked on the broadcast of Super Bowl XXXIX.

Now Reid, after winning his second conference championship in seven tries, finally gets a chance to make amends with an offense that doesn’t need to be told to hurry up. He has an incredible fastbreaking point guard in Patrick Mahomes — “Magic Mahomes,” tight end Travis Kelce calls him – and this time Reid doesn’t have to face Tom Brady, but Brady’s former understudy. Jimmy Garoppolo is a lot of things as a winning quarterback, but Patrick Mahomes he is not.

Mahomes is 24, and it would appear he is not facing nearly as much pressure as his coach in this matchup. Then again, Dan Marino was 23 when he lost the Super Bowl after the 1984 season, his second in the league, to Joe Montana and the 49ers, before he was consoled by many who assured him he would return to the biggest stage in American sports at least a few more times. On cue, Marino never returned.

Aaron Rodgers appeared in one Super Bowl, after the 2010 season, and might never, ever get back. Mahomes is smart enough and mature enough to know the way sports works. The Chiefs hadn’t appeared in the big game in half a century, even though their founder, Lamar Hunt, was the elder who came up with the term “Super Bowl” way back when. Mahomes’ father Pat, the former big-league pitcher, wasn’t even born the last time Kansas City won it all. Pat Mahomes was a clutch reliever during the New York Mets‘ playoff drive in 1999, only to be (barely) left off their postseason roster in 2000 — costing him his only chance to pitch in a World Series.

NFL PrimeTime continues this postseason with extended highlights and analysis following the conclusion of each day’s playoff games. Watch on ESPN+

Nothing is guaranteed in sports, other than eventual pain and heartbreak. This is an opportunity Mahomes needs to attack as if he’s about to be swallowed whole by Marino’s fate.

Sunday night, the Chiefs tweeted out a video of Hunt’s son Clark holding the AFC Championship trophy bearing his father’s name while saying, “We’re headed to Miami and we’re going to bring another Lombardi Trophy home to Kansas City.” Early bulletin board material for the 49ers? Maybe. But it was hard to blame anyone from Kansas City for saying anything after the franchise’s biblical drought, and after losing to Belichick and Brady last year because Dee Ford — now with San Francisco, of all teams — lined up offside.

This was Andy’s big night, defined by chants and confetti and championship caps. Reid said he held his wife Tammy’s hand throughout the ceremony. He was giddy enough to call her his girlfriend.

“But it’s not done,” Reid said. “It’s not done.” He knows better than anyone, along with his Super Bowl counterpart, Shanahan, who received the NFC Championship trophy in San Francisco from his father, Mike, a two-time champ.

A great moment that Kyle had earned. Now comes the harder part. Shanahan will have to navigate two weeks of reminders about the championship he blew with the Falcons. If nothing else, he has youth on his side.

Reid does not. He has to answer for a long and distinguished career marked by an asterisk the size of Arrowhead Stadium.

“We’re sick of hearing what the media says about him,” Kelce said, “that he can’t win the big one.”

There’s only one sure way to silence those thoughts and questions. Andy Reid and Kyle Shanahan, both haunted, need to be the ones doing the haunting this time around.