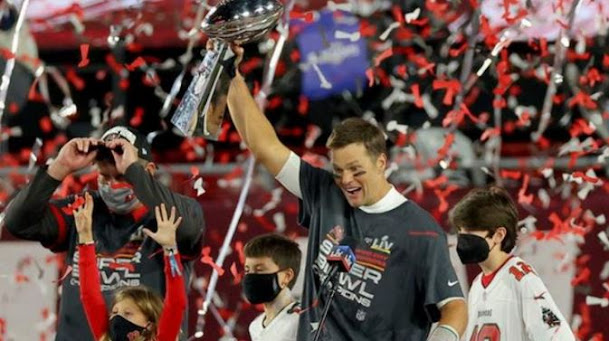 Brady won six titles with the New England Patriots before his final triumph with the Buccaneers last year.

The five-time Super Bowl Most Valuable Player is retiring after deciding he could no longer make the “competitive commitment” to continue.

His final game in the NFL was a 30-27 loss to the Los Angeles Rams in the play-offs, when his heroics narrowly failed to pull off a sensational comeback from 27-3 down.

Brady, a three-time NFL season MVP, had a year remaining on his contract with the Bucs.

In a statement posted on social media, he said: “I have always believed the sport of football is an ‘all-in’ proposition – if a 100% competitive commitment isn’t there, you won’t succeed, and success is what I love so much about our game.

“My playing career has been such a thrilling ride, and far beyond my imagination, and full of ups and downs. When you’re in it every day, you really don’t think about any kind of ending.

“As I sit here now, however, I think of all the great players and coaches I was privileged to play with and against – the competition was fierce and deep, just how we like it.

“But the friendships and relationships are just as fierce and deep. I will remember and cherish these memories and revisit them often.

“I feel like the luckiest person in the world.”

Following Brady’s announcement, the Patriots tweeted: “It was quite the ride. Thank you and congratulations, Tom Brady.”

The Buccaneers said: “Memories to last a lifetime. Thank you.”

Brady did not mention the Patriots in his retirement statement, but later responded to a tweet from the team, saying: “Thank You Patriots Nation, I’m beyond grateful.”

Brady played in 10 Super Bowls, including an incredible comeback from 28-3 down against the Atlanta Falcons in 2017, and had a perfect 16-0 regular season with the Patriots in 2007.

He won a Super Bowl in three different decades and retires after amassing a career-high 5,316 passing yards in his final season.

Brady leads the all-time passing statistics, with 84,520 yards – more than 4,000 clear of his nearest rival, the retired Drew Brees.

In 2015 Brady was given a four-game suspension for allegedly colluding to deflate balls during a play-off game, but the ban was overturned after US judge ruled it had “legal deficiencies”.

His announcement on Tuesday comes after conflicting reports over the weekend about his future.

It was widely reported on Saturday evening that he had decided to retire, but his company TB12 Sports then deleted a tweet appearing to confirm the news.

And later, speaking to the NFL Network, Brady’s father Tom Brady Sr said his son had not yet “made a final decision”.

On Monday, the former Patriots superstar said he was considering his future on a day-to-day basis.

‘An incredible competitor and leader’

NFL commissioner Roger Goodell said Brady would be remembered “as one of the greatest to ever play in the NFL”.

He added: “An incredible competitor and leader, his stellar career is remarkable for its longevity but also the sustained excellence he displayed year after year.

“Tom made everyone around him better and always seemed to rise to the occasion in the biggest moments.”

“A generation of football fans have grown up knowing only an NFL in which Tom Brady dominated.”

“To do it as long as he did, at the highest of levels, is absolutely incredible. It was an honour and a privilege to compete against him on the field, and I truly appreciate his friendship off the field.

“I have always admired and respected his competitiveness, his dedication, his discipline, and his commitment to being the best. I wish him the best in his next chapter. Congratulations again, pal!”