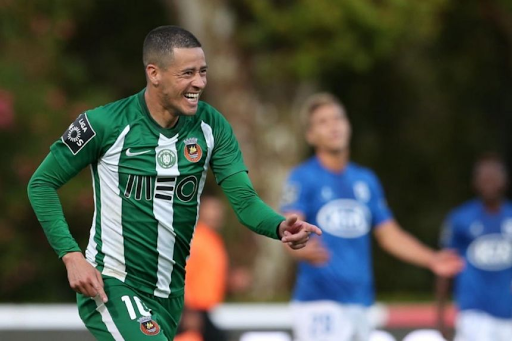 Talk about the road less travelled. A Singapore football club have spent real money to sign a player. With the new season just weeks away, possibly, Lion City Sailors have splashed out almost $3 million on Diego Lopes from Portuguese side Rio Ave. The 26 year old is Brazilian and wears the number 10 shirt and let’s be honest, that has been enough for clubs in the region to swoop.
But this feels different. Singaporean clubs tend not to pay transfer fees and players at the peak of their career tend not to mark down the city state for the next step in their football career. But here we are. Lion City Sailors are privately owned, have deep pockets and have big ambitions. They signed the prolific Stipe Plazibat halfway through last season from Hougang United and with Adam Swandi and Gabriel Quak also in the team there is an aura of a tropical ‘Galacticos‘ in sunny Bishan.
Singapore football has been crying out for investment for years now so to moan about this would be to take churlish to levels not even Jose Mourinho dares visit. The league has been moribund for so many years now that when Albirex Niigata won the title last season, for the fourth time in five years there was little outcry. Angst had been replaced by shrugged shoulders and, even worse, apathy.
Can we expect to see Lion City Sailors go down the road of Johor Darul Ta’zim across the Causeway and blow everyone else out of the water? I hope not. Small leagues dominated by a single club or two clubs, be it Scotland or Malaysia, tend not to be strong leagues and Singapore football would be the better were we to see Tampines return to their own glory days doing battle with the likes of LCS and Albirex. Hopefully, other clubs can attach themselves to LCS’s coat tails and enjoy the ride rather than be content to be cannon fodder. Certainly, in Malaysia JDT are literally in a league of their own but even their staunchest fans would admit the league would be stronger were other clubs blazing their own trails?
LCS and Tampines Rovers did push Albirex all the way last season but the Japanese backed side were too strong and too experienced. Hopefully a year older and a year wiser a local side can wrest the title home for the first time since 2014 but to expect Lopes to win it by himself would be to put too much pressure on his shoulders and to under estimate the challenges that lie ahead and not just on the pitch.
Any title bid will be hamstrung from day one as both the Stags and the Sailors will also be expected to face the rigours of AFC Cup competition, and while they will be jetting around the region collecting airmiles history shows they won’t be getting much sympathy from Jalan Besar.
Lopes will soon notice the Singapore football scene is a lot more ‘genteel’ compared to what he has been used to in Portugal and Brazil but beneath the bon homie of chilled Tiger Beer and roti pratha the satay sticks will be being sharpened and when he doesn’t produce immediate results they will soon find their mark.
For me, I hope Lopes is given time to settle and make an impact just like I hope to see Tampines Rovers challenge for the title and for Hougang United and Geylang International to kick on. Anything that gets people talking about Singapore football and raises its profile has to be a good thing, right?